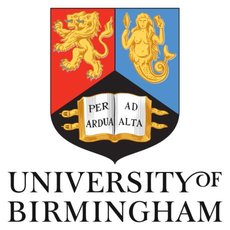 University of Birmingham Details:
Official Website: birmingham.ac.uk
History:
A view across Chancellor’s Court, towards the Law building Although the earliest beginnings of the university were previously traced back to the Queen’s College which is linked to William Sands Cox in his aim of creating a medical school along strictly Christian lines, unlike the London medical schools, further research has now revealed the roots of the Birmingham Medical School in the medical education seminars of Mr John Tomlinson, the first surgeon to the Birmingham Workhouse Infirmary, and later to the General Hospital. These classes were the first ever held outside London or south of the Scottish border in the winter of 1767–68. The first clinical teaching was undertaken by medical and surgical apprentices at the General Hospital, opened in 1779. The medical school which grew out of the Birmingham Workhouse Infirmary was founded in 1828 but Cox began teaching in December 1825. Queen Victoria granted her patronage to the Clinical Hospital in Birmingham and allowed it to be styled “The Queen’s Hospital”. It was the first provincial teaching hospital in England. In 1843, the medical college became known as Queen’s College.
Mason Science College
Ceiling of the Aston Webb building
In 1870, Sir Josiah Mason, the Birmingham industrialist and philanthropist, who made his fortune in making key rings, pens, pen nibs and electroplating, drew up the Foundation Deed for Mason Science College. The college was founded in 1875. It was this institution that would eventually form the nucleus of the University of Birmingham. In 1882, the Departments of Chemistry, Botany and Physiology were transferred to Mason Science College, soon followed by the Departments of Physics and Comparative Anatomy. The transfer of the Medical School to Mason Science College gave considerable impetus to the growing importance of that college and in 1896 a move to incorporate it as a university college was made. As the result of the Mason University College Act 1897 it became incorporated as Mason University College on 1 January 1898, with Joseph Chamberlain becoming the President of its Court of Governors.
Royal charter
It was largely due to Chamberlain’s enthusiasm that the university was granted a royal charter by Queen Victoria on 24 March 1900.[19] The Calthorpe family offered twenty-five acres (10 hectares) of land on the Bournbrook side of their estate in July. The Court of Governors received the Birmingham University Act 1900, which put the royal charter into effect on 31 May. Birmingham was therefore arguably the first so-called red brick university, although several other universities claim this title.
Student Services and Facilities:
Original Buildings
Plan of the new University Campus at Edgbaston, proposed by architects Sir Aston Webb and Mr. Ingress Bell y.1909
The Aston Webb buildings, Chancellor’s Court
The main campus of the university occupies a site some 3 miles (4.8 km) south-west of Birmingham city centre, in Edgbaston. It is arranged around Joseph Chamberlain Memorial Clock Tower (affectionately known as ‘Old Joe’), a grand campanile which commemorates the university’s first chancellor, Joseph Chamberlain. Chamberlain may be considered the founder of Birmingham University, and was largely responsible for the university gaining its Royal Charter in 1900 and for the development of the Edgbaston campus. The university’s Great Hall is located in the domed Aston Webb Building, which is named after one of the architects – the other was Ingress Bell.
Libraries and Collections:
Birmingham University Library Services operates nine site libraries. They are the Barber Fine Art Library, Barber Music Library, Barnes Library, Education Library, Main Library, Orchard Learning Resource Centre, Dental Library, and the Shakespeare Institute Library.
The Shakespeare Institute’s library is a major United Kingdom resource for the study of English Renaissance literature.
Student life:
The University of Birmingham Guild of Students is the university’s student union. Originally the Guild of Undergraduates, the institution had its first foundations in the Mason Science College in the centre of Birmingham around 1876. The University of Birmingham itself formally received its Royal Charter in 1900 with the Guild of Students being provided for as a Student Representative Council.
Sport:
The university has been consistently the British Universities & Colleges Sport. The university’s reputation for sport is a long-standing one; in 1954 it became the first UK university to offer a sports degree, and until 1968 exercise was compulsory for all students.
Organisation and Administration:
Academic Departments
Aston Webb building from the rear
Stained glass window in the Great Hall
Birmingham has departments covering a wide range of subjects. On 1 August 2008, the university’s system was restructured into five ‘colleges’, which are composed of numerous ‘schools’.
Arts and Law (English, Drama and American & Canadian Studies, History and Cultures, Languages, Cultures, Art History and Music, Birmingham Law School, Philosophy, Theology and Religion)
Engineering and Physical Sciences (Chemistry; Chemical Engineering, Civil Engineering, Computer Science, Engineering, Mathematics, Metallurgy and Materials, Physics and Astronomy)
Life and Environmental Sciences (Biosciences, Geography, Earth and Environmental Sciences, Psychology, Sport and Exercise Sciences)
Medical and Dental Sciences (Institute of Cancer and Genomic Sciences, Institute of Clinical Sciences, Institute of Inflammation and Ageing, Institute of Applied Health Research, Institute of Cardiovascular Science, Institute of Immunology and Immunotherapy, Institute of Metabolism and Systems Research, Institute of Microbiology and Infection).
Social Sciences (Birmingham Business School, Education, Government and Society, Social Policy)

Content accurate at the time of compilation. However, details may be subject to change. You should always confirm details with the provider. Student statistics are sourced from HESA, the Higher Education Statistics Agency, 2016–17 data.